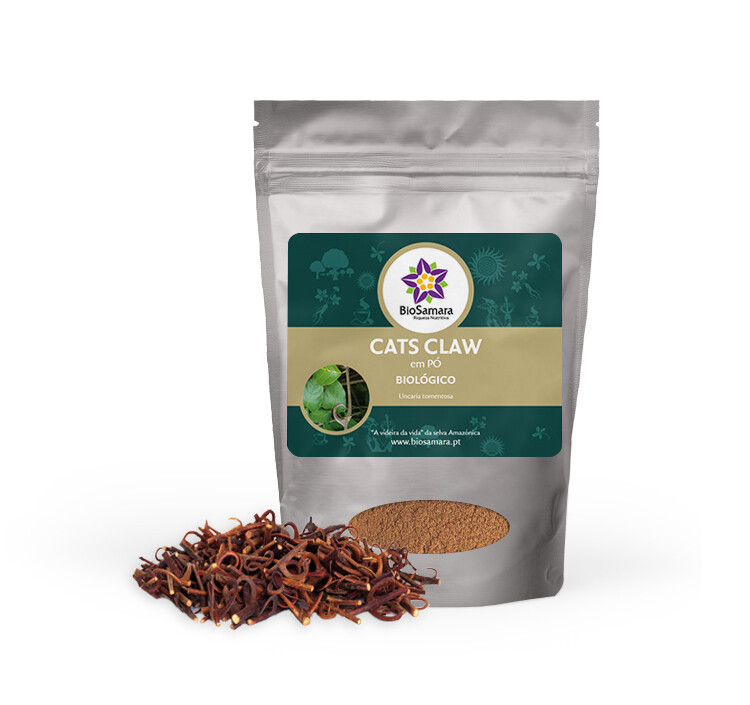 Cat's Claw is a woody vine that derives its name from the thorns that grow along its vine that resemble a cat's claws.
Cat's Claw has a 2000-year history of use by indigenous tribes to cure various diseases. The Ashaninka indigenous tribe in central Peru still uses Cat's Claw to treat asthma, urinary tract inflammation, arthritis, rheumatism and bone pain; recover from childbirth, cleanse the kidneys; to heal deep wounds, to control gastric inflammation and ulcers, and to cure cancer.
Cat's Claw is also traditionally used to treat diabetes, urinary tract cancer in women, bleeding, menstrual irregularities, fevers, gastritis, rheumatism, tumors and inflammation, as well as for internal cleansing and to balance the body in general.

Properties documented by use in traditional medicines:
Relieve pain, anticoagulant (blood thinner), blood purifier, detoxifier, diuretic, tones, balances and strengthens the gastric system, reduces cholesterol, tones and strengthens bodily functions in general and heals wounds
The most common use of Cat's Claw in modern medicine is as an immune stimulant, as a general tonic to stay healthy and prevent disease, for arthritis and inflammation, for bowel and colon problems, and as a complementary therapy for cancer. cancer.
Cat's Claw is also used for stomach ulcers, eczema and liver disease.
Studies have shown that Cat's Claw can be effective in the treatment of knee pain, for the treatment of stomach and intestinal disorders (such as Crohn's disease, leaky bowel syndrome, ulcers, gastritis, diverticulitis, and other inflammatory conditions of the stomach and intestines).
When Cat's Claw is used in conjunction with traditional cancer therapies such as chemotherapy and radiation, patients have reported reduced side effects to traditional therapies (such as hair loss, weight loss, nausea, minor infections, and problems of skin). Research explains this because Cat's Claw can help repair cellular DNA and prevent cells from mutating, it can also help prevent the loss of white blood cells and immune cells from damage caused by many chemotherapy drugs.

Properties documented by scientific studies:
Anti-inflammatory, anticancer, cell protection, antioxidant, anti-tumor, antiviral, immune system stimulant.
Cat's Claw can decrease the effectiveness of medications and drugs that suppress the immune system, such as Imuran (Azathioprine), CellCept, Neoral, Sandimmune (cyclosporine), Prograf, Rapamune and Zenapak.
Cat's Claw is mostly broken down by the liver, so it could theoretically interfere with the effectiveness of drugs that are processed by liver enzymes, such as fexofenadine, cholesterol drugs such as lovastatin, antifungals such as ketoconazole, cancer drugs such as paclitaxel or vinblastine.

Use:
Mixed in water, juices, smoothies, soup or tea.
Recommended maximum daily dosage – 1 to 2g, 2 to 3 times a day. For a therapeutic dose contact your naturopath.
The beneficial tannins in Cat's Claw are released only if taken in an acidic medium, so it is recommended to add a little lemon juice in a quarter cup of water to mix Cat's Claw powder.

Warning:
It should not be used by people who have received organ transplants or who have bleeding disorders, children, pregnant women, women who are trying to become pregnant or who are breastfeeding.

Note:
Much of the information and descriptions of products and their properties contained on this website have been collected from various databases and reports of traditional medicines and have not been submitted, evaluated or controlled by the medical or food authorities / EFSA (European Food Safety Authority). According to the law in force, natural products and food are not yet covered in the cure, diagnosis and prevention of diseases. If you are being medicated, it is advisable to consult your doctor or therapist for more information about possible interactions with your medications.